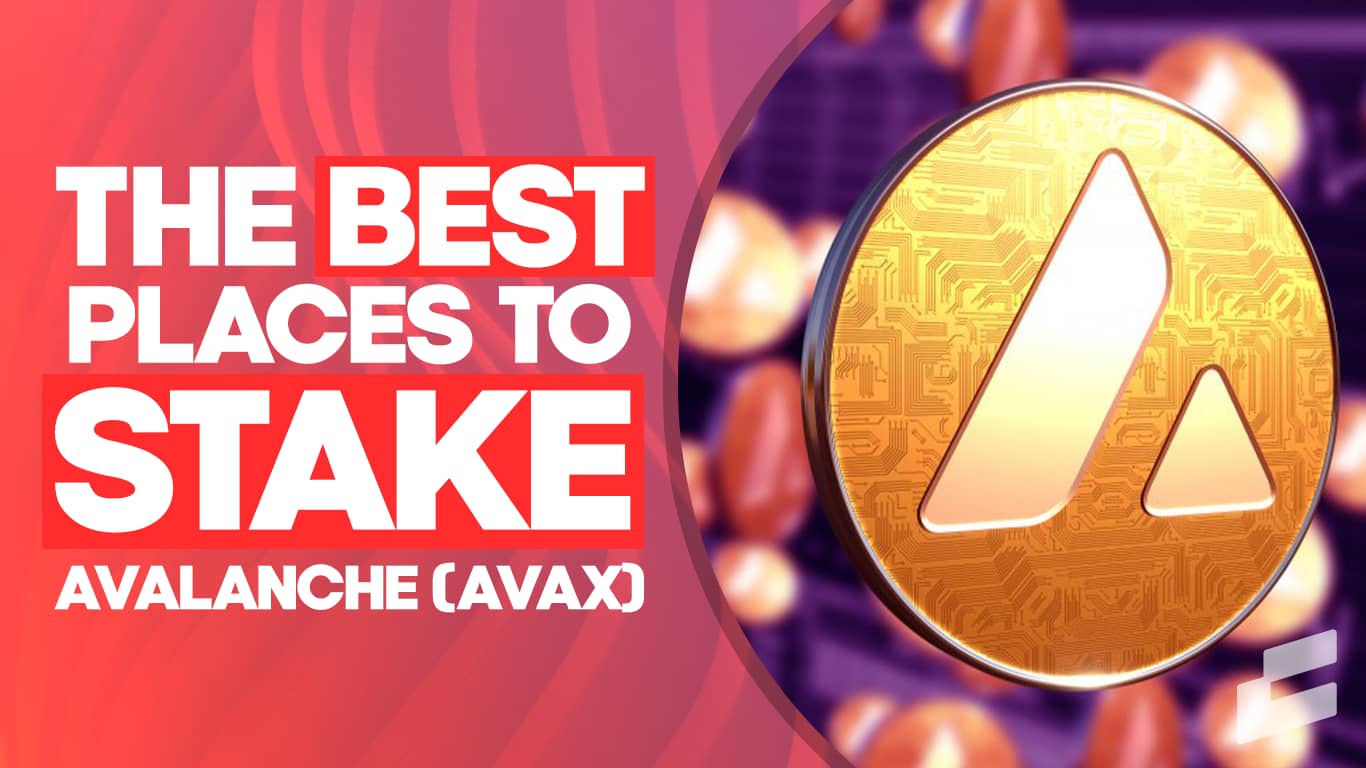 How to Stake AVAX: The 3 Best Places to Stake Avalanche in 2022

Avalanche (AVAX) is one of Ethereum’s prominent competitors. Although it launched just a few years ago, AVAX has grown massively, ranking in the top 20 cryptocurrencies based on market cap. AVAX is also a popular staking asset, allowing several investors to earn good interest on their tokens while they anticipate a future price appreciation.

These are our picks for the best places to stake Avalanche (AVAX):

Can You Stake AVAX?

The Avalanche blockchain is based on a PoS consensus mechanism; thus, its governance token, AVAX, is used as a staking asset.

Staking in cryptocurrency basically means locking up some of your tokens on the network in return for rewards, mostly in the form of interest. When you stake your tokens, they cannot be traded as they are used to verify transactions and keep the network operational and secure.

Staking AVAX as a Validator

For most PoS tokens, including AVAX, staking usually occurs via delegation. This simply means that investors delegate their AVAX tokens to validator nodes that verify network transactions. Avalanche has over 1,000 validators that accept AVAX tokens from investors.

You should also consider a validator slashing history. Slashing simply refers to sanctions the network places on validators for displaying malicious behavior. When a validator on Avalanche suffers slashing, it loses all earned staking rewards.

Staking AVAX as a Delegator

That said, in return for their services, validators usually charge a commission fee on the staking rewards of their delegators. For investors who want to avoid such fees, Avalanche allows anyone to set up a validator, provided they are staking a minimum amount of 2,000 AVAX.

However, It is also worth noting that the chances of a validator getting picked to verify transactions on Avalanche are proportional to its amount of AVAX holdings. Thus, it is essential to stake your tokens with validators with a large stake weight

To round off, another way of staking AVAX is by subscribing to staking products on centralized exchanges. These platforms usually offer staking products with flexible or fixed terms and with individual interest rates. Staking via exchanges is easy and recommended to amateur investors.

How much can you earn by staking AVAX?

By staking AVAX via delegation, investors earn interest at an annual percentage rate (APR) of 8.46%. Binance offers a maximum APR of 18.9% on its AVAX staking products, while OKX allows investors to earn as high as 23% annual percentage yield (APY).

How to Stake AVAX

For beginners, exchanges often serve as the easiest and most accessible options for staking AVAX. The following are steps illustrating how to stake AVAX on the Binance exchange.

What are the Best Places to Stake AVAX?

There are several platforms available to investors looking for where to stake AVAX. Under this section, we shall provide an overview of the best places to stake AVAX, based on the several features including the estimated annual yield and minimal staking amount.

Best for self custody staking

Avalanche wallet is the official wallet of the Avalanche network for storing, trading, and staking AVAX. It operates as a web-based application with no server communication, meaning it is directly connected to the Avalanche blockchain.

The Avalanche wallet allows investors to participate in staking while retaining full custody of their tokens. If you are an investor who prefers to keep his assets offline, the Avalanche wallet is also suitable for use as it can be connected to hardware wallets such as the Ledger Nano X.

To stake AVAX using the Avalanche wallet, investors are required to delegate a minimum amount of 25 AVAX to an active network validator. That said, investors can only stake their AVAX tokens for a minimum period of 14 days and a maximum period of 1 year.

As earlier stated, you earn an APR of 8.46% by staking your AVAX tokens via delegation. However, do note that staking with validators comes with a commission fee of at least 2% of your staking rewards.

Best way to stake AVAX as a beginner

Binance is the world’s biggest cryptocurrency exchange. It is based in the Cayman Islands and serves over 90 customers globally. Binance is mainly used for trading cryptocurrencies, but it also offers various services, including staking.

On Binance, there are five staking products available to AVAX investors. These include one flexible product and four staking products with a fixed staking duration ranging from 30-120 days.

The table below will provide information on each staking product, its individual APR, and minimum subscription amount.

That said, when staking via an exchange such as Binance, it is worth noting that the platform will possess full custody of tokens during the staking period. In instances of any attack on the exchange, you could lose your staked assets.

Based in Seychelles, OKX is a popular cryptocurrency and derivatives exchange platform with a large customer base of over 20 million users in over 100 countries globally. Aside from trading cryptocurrencies, OKX is also a major platform for earning interest on crypto assets via staking.

The table below covers each AVAX staking product on OKX, its est. APY, and the minimum subscription amount.

Like Binance, each staking product with a fixed term demands that investors lock up their AVAX tokens for the stipulated period of time – 15, 30, 60, 90, or 120 days. The 120 days staking product offers the highest APY and is recommended for investors who plan to hold AVAX long term.

With the flexible staking product, investors can stake AVAX while retaining their access to them if required for instant transactions. Staking AVAX via OKX is quite easy, albeit investors are reminded that any attack on the exchange could lead to the loss of their staked assets.

What is Avalanche (AVAX)?

Avalanche is a smart contract-compatible blockchain platform that provides support for decentralized applications as well as customized autonomous blockchains. It was launched in 2020 by Ava Labs, founded by Emini Gun Sirer.

Despite a few years of operation, Avalanche has grown to be one of Ethereum’s main competitors in smart contract operations. Its ecosystem consists of over 400 projects with a TVL value of over $1.56 billion.

Avalanche boasts of a scalable blockchain solution with a high level of decentralization and network security. It also offers users near-instant finality with low transaction fees compared to other networks.

In validating transactions, Avalanche employs a proof-of-stake (PoS) consensus mechanism, allowing it to operate as an eco-friendly blockchain protocol.

That said, all transactions on the Avalanche network are powered by its governance token AVAX. The AVAX token is also used as a requirement for creating blockchains in the Avalanche ecosystem while serving as a basic unit of account between these several blockchains.

Avalanche is broken down into three sub-chains: X-Chain (Exchange Chain), P-Chain (Platform-Chain), and C-Chain (Contract Chain). Both the X-Chain and P-Chain are involved in the staking process whereas the C-Chain is not.

How many AVAX do you need to stake?

You need a minimum amount of 25 AVAX to delegate AVAX for staking. However, exchanges such as Binance require a far less amount to stake AVAX.

Where can I buy Avalanche?

You can purchase Avalanche(AVAX) on several exchanges, including Binance, Coinbase, Crypto.com, etc.

What is the delegation fee on Avalanche?

Avalanche (AVAX) is one of the best coins for staking due to its high-interest rates, accessibility, and price growth prospects. All staking platforms listed above are credible and excellent choices for staking your AVAX tokens. That said, remember to do your due diligence at all times before making any investment decision.